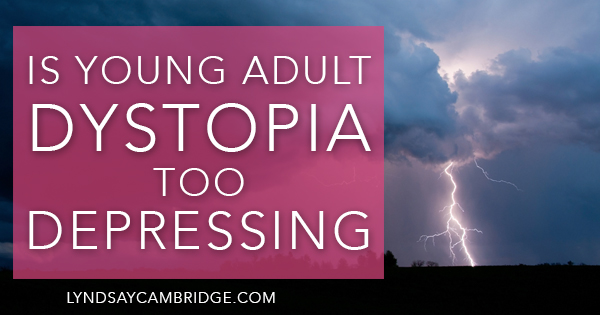 I asked myself this very question after reading an article in the Guardian about the bleakness of YA dystopian literature.

The writer of this piece (which is a really great read!) by Delve into Dystopia, suggests dystopian fiction makes our troubles and worries pale in comparison to the kind of worlds we’re being presented within current dystopian fiction, where tales of post–apocalyptic hell are pretty normal.

So it’s understandable that our daily worries feel rather silly, as most of us (thankfully!) will never experience the kind of horror and violence in our lives that we see in dystopian literature.

But Dystopia, by its very definition, is the opposite of utopia – “an imagined place or state in which everything is unpleasant or bad, typically totalitarian…”

It’s safe to say that when we read a dystopian novel, it’s not all going to be all rainbows and unicorns – although that would make interesting reading *imagines world domination by adorable but ultimately evil unicorns with laser beam head horns*

Is Dystopia too simple?

I don’t feel the issue for dystopian fiction is its bleakness, but rather it’s simplicity. The common theme that runs through the genre is government = bad, suffering people = good.

But I think when looking at dystopia and utopia, we’re looking at two sides of the same coin. Isn’t  one person’s hell is another’s heaven?

Some dystopian worlds we’re shown are just so bleak and unbearable they become difficult to imagine. The reader needs to be presented with why the world has been created. Yes, you could just have an evil dictator, hell bent on power and destruction but would it not be more interesting to examine the light and shade of the argument? To say, okay, this world is really shitty for some, but what would the alternative be?

Take, for example, population control, which is a common theme that runs through many dystopian novels.

Why would the government in this fictional world decide to control birth? Because they’re evil lunatics, that’s why. Mwahahaha!!!

Well, maybe. Or maybe someone thought the world was becoming too full? Maybe healthcare, housing and jobs were in short supply? Famine and wars were rife? And maybe population control was the only alternative. Sure there are a few ya’ know, severe human rights violations but hey, that’s the price they had to pay.

I think when we do this, it becomes easier for the reader to understand the world we’re presented with, and it makes us ask the question – what world is better? And what choices would we make in that situation?