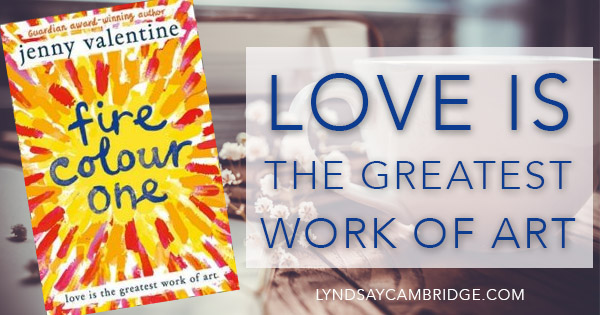 I was introduced to Fire Colour One at YALC – the Young Adult Literature Convention. What caught my eye was the front cover design with these lovely sparkly bits in it. Which is not a valid reason to read a book but it helps!

Before YALC, I’d completely dismissed this book as I thought it was a book about art for teenagers (stupid me). Seeing as I know nothing about art, I was completely put me off the story. I can’t even draw. Below is my vague attempt at a unicorn…

See. That’s not working for me.

But this book is so, so much more than just art! It’s about a young girl called Iris who’s reunited, after a long time, with her Father, Ernest, who is dying of cancer.

Her Mother and stepfather are weighed down by debt, and they see Ernest with pounds signs in their eyes. Essentially, Iris’ mother, Hannah, bribes Ernest, allowing him to see his daughter before he dies but only if he writes her into his will.

So, the story looks at how the relationship between Ernest and Iris develops.

For me, the novel has two main themes. Money and love. It looks at how money drives people and turns them into nothing more than greedy vultures like Iris’ mother and step-father.

And maybe I’m reading it wrong, but I think the link between fire and money and fire and art is quite interesting. Iris is a pyromaniac, meaning she likes to play with fire. Both art and money are flammable objects. I think (and this is just an interpretation!) Jenny is trying to say that these things aren’t important. Money. Art. They’re flammable. But love, family and friendship are not. They survive.

Or…I could be completely wrong! But that’s the wonderful thing about books 😛

Fire, Colour, One is a character-driven book rather than a plot driven book. So, if you’re looking for car chases and explosions, it’s not something I would recommend.

There are a small set of characters. Iris is incredibly likeable; she’s intelligent, witty, logical, sarcastic, funny, understanding and caring. She’s very ‘old’ for her age, very mature. Certainly more mature than me when I was a teen!

Jenny Valentine has come under some criticism for writing Iris’ Mother too simply. However, I think Hannah is written wonderfully. She is the antagonist in the novel, and I can see her character with absolute clarity. I feel like I know her in real life. I’ve met her before, as a different person, obviously, but I’ve met very similar people to Hannah. They do exist!

Hannah is essentially a heartless woman who will even use her daughter against her dying ex-husband to get her hands on his money. You learn very little about her, but that’s because she reveals very little of herself.  She’s stone cold. You do get a little backstory to her in the book, and I found Hannah’s story immensely powerful and realistic.

Ernest, Iris’ Father is also wonderfully written. His love for his daughter is so strong and emotional; it makes for hard reading at times.

The only character I didn’t quite connect with is Thurston. I won’t give too much away but for me, he seemed a bit absent in this novel for me to truly ‘get’.

A book rating for parents, guardians, librarians and anyone who fancies knowing!

There is no sex.

There is no violence.

There are some swear words (plus a few F words), but they’re not used often. The swear words are in keeping with the situation.

The best thing about this book, hands down was the writing. It was beautiful, and I don’t mean beautiful in the way that Jenny describes takes five pages to describe a leaf. It was still a fast-paced book. But it also felt as though every word had been carefully selected. She almost sings as she writes. I can visualise everything she says.

It gave me a serious case of green-eyed writer envy!

For anyone looking for action, this is not the book for you. The plot is slow, but for me, I didn’t care because the writing was just so good.

Plus the ending was amazing! I won’t give anything away, but it’s certainly worth sticking with until the end.

I started reading the book in the bath, and I couldn’t put it down. Two hours later I came out with my skin looking all crinkly!

And new to my book reviews! I also want to include my favourite quotes from each book. This one contains no spoilers.

I think my day is about four hours longer than Hannah’s without all the grooming in it. It’s really quite liberating, not giving a shit.

If you have read the book, I’d love to know what you thought of it,  just comment below!

P.S. I did have the actual book but leant it to a friend and couldn’t wait long enough to do the review!